Distinguished public and community service highlight Phil Heimlich’s career. Some say his story is as interesting as those of his famous relatives.

Phil graduated with Distinction from Stanford University, earning a law degree at the University of Virginia and then beginning his service to the public as an Assistant Hamilton County Prosecutor in Cincinnati, Ohio. He specialized in felony criminal prosecutions, including murder, rape, robbery, assault and white-collar offenses.

As a fiscal watchdog, Phil uncovered corruption in the Genesis Housing program, which led to its defunding; he exposed waste at the city-run asphalt plant, resulting in the plant’s closing and outsourcing of the service; he uncovered abuses at taxpayer-funded Drake Hospital that threatened to bankrupt the facility – working with the University of Cincinnati, Phil was able to preserve the hospital and eliminate millions in taxpayer subsidies.

As a passionate advocate for school choice, Phil established Riverside Academy, a kindergarten through sixth grade charter school; and the Life Skills Center, a charter school which provides academic instruction, job training and placement for high school dropouts. He is also the co-founder of the Children’s Scholarship Fund of Greater Cincinnati, which has raised $3.5 million in scholarships for low-income children.

Phil currently serves as legal advisor to Republicans for the Rule of Law, an organization devoted to protecting our freedoms despite efforts by the Trump administration to undermine them. He helps lead Operation Grant, an affiliate of the Lincoln Project and Republican Voters Against Trump, dedicated to encouraging Ohio Republicans to vote for Joe Biden in this November’s election. 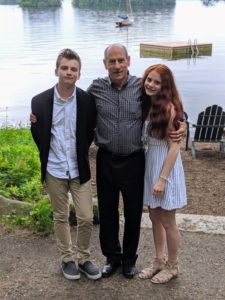 Phil’s awards include the first Torch Award for Community Service from Cincinnati Hills Christian Academy and the Community Defender Award from Citizens for Community Values. Phil believes it is important for him to share his faith in Christ and the impact God has made in his life. Phil has given this message and spoken at Mayor’s Prayer Breakfasts throughout the country.

And what about those famous relatives? Phil is the son of Dr. Henry Heimlich, inventor of the Heimlich Maneuver. His grandparents, Arthur and Kathryn Murray, were television stars in the 50’s and 60’s and founders of the Arthur Murray Dance studios.