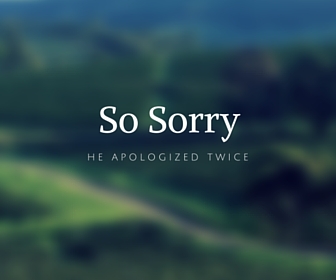 Cincinnati Mayor John Cranley did something unheard of in American politics recently. He apologized…twice! First, he told the board of elections he was sorry for violating election law by speaking in favor of a ballot issue inside a polling place. Then he confessed feeling terrible for his comments that Syrian refugees couldn’t resettle in his city.

What impressed me was he didn’t try to spin his actions. He just said they were wrong. Contrast that with the contortions GOP presidential candidate Ben Carson engaged in when explaining how he had no involvement with a shady nutritional firm, even after he was caught appearing in promotional videos for the company. Or candidate Marco Rubio who justified his use of a Republican party credit card for five star hotels and expensive dinners because rules for using the card were “unclear.”

Wouldn’t it be nice if those responsible for the Iraq war accepted responsibility for the suffering they inflicted? Or if they expressed some remorse for the hundreds of thousands of innocent people killed? Cranley set a positive example that I doubt many will follow. I’m Phil Heimlich.